San Marcos is a city in the United States, Texas. The city is near the I-35 motorway between Austin and San Antonio. Is the administrative center of Hayes County. The population of the city was 44,894 according to the 2010 census.

The city is based on the banks of the San Marcos River, the area is considered to be one of the oldest continuously populated places in the northern hemisphere. San Marcos is home to the University of Texas and the Aquariana Educational Center.

In 2010, BusinessWeek included San Marcos in its list of best places to raise children. In 2013, the US Census Bureau named San Marcos the fastest-growing city in the United States. In December 2013, San Marcos was named ninth on the list of the most interesting small cities in the USA by the blog Business Insider.

Archeologists found evidence that people from Clovis culture lived along the San Marcos River. This suggests that the river became a human habitat for more than 10,000 years ago. The source of the cool and clean river is the San Marcos Springs stream, which is fed by the Eduards aquifer. San Marcos Springs is the third largest collection of sources in Texas. The manual never dried up during all the time of observation.

In 1689 the Spanish Alonso de León headed an expedition from Mexico to explore Texas and identify a number of missions and presidio in the region. The de-León team helped to build the Camino Real road (later called the San Antonio Old Road). DeLeón's unit reached the river on April 25, the day of the memory of St. Mark the Evangelist. Thus the river was called San Marcos.

In November 1846, the first English-speaking Americans settled in the immediate vicinity of San Marcos Springs. The Texas Legislatura organized the Hayes District on March 1, 1848 and appointed San Marcos the administrative center of the district. In 1851, the city center was built about a mile south-west of the upper riverbanks. The city has become a processing center for cotton and grinding of local agricultural products. The most famous founder and one of the first settlers was General Edward Berlson, the hero of the Texas Revolution and former vice president of the Republic of Texas. In 1849, Berlson built a dam in the upper riverbanks that served several mills. 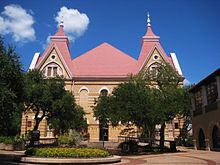 Old main building of the University of Texas, 2010

For ten years after the arrival of the railway to the region in 1881, San Marcos grew up by trading and transporting livestock and cotton.

In 1899, the Normal School of South-West Texas (now known as the University of Texas) was established in the city to meet the demand for public school teachers in Texas). In 1907, the private Baptist Academy of San Marcos was established helped to strengthen education as an important industry for the city. The demands of World War II brought diversification of urban activities, and, with the advent of manufacturing and light industry, the city began to grow again.

In the late 1940s, Hollywood filmmaker Shadrak Graham made a documentary about daily life in San Marcos as part of his series "Our City," which was designed to spur trade and civic activism in small towns. The film highlights several local enterprises of that era, including "Smith's Flowers", "Waldrin's Cleaners", "Lack's Furniture", and "Palace Movie Theater".

In 1942, east of the city, the San Marcos Army Air Field Air Base was established, renamed San Marcos Air Force Base in 1947 and finally named Gary Air Force Base in 1953, in honor of Lt. Arthur Edward Gary, the first resident of San Marcos, killed in World War II on December 7, 1941 in the Philippines. During the war, the base trained more than 10,000 navigators, and in the following years the base became the largest training center for pilots and mechanics of army aircraft and helicopters in the USA. The base housed 21 squadron and 4,800 personnel. In 1956, the base was handed over to the army and closed in 1963. Later, one part of the base became part of the airport, and the second was re-launched Gary Job Corps to educate young people.

In 1960, with the establishment of the Aquariana Educational Center and Wonder World Park, the tourist component of the city's economy began to grow. By 1960, the Normal School of South-West Texas had grown to size an important regional institute and, when combined with the establishment of the Gary Job Corps military training center in 1965, made the education of San Marcos the largest industry. The significant growth of neighboring Austin contributed to the further development of San Marcos.

In 1973, San Marcos and Hayes were included in the U.S. Census Bureau in the Austin Statistical Area. By this year, the city's population had grown to 25,000, not to mention 20,000 students at the South-West University of Texas.

San Marcos is located in Central Texas, 47 km southwest of Austin and 76 km northeast of San Antonio. The main road through the city is the I-35 motorway. The town is located on the border between Hill Country and the coastal plains, in the area of the fracture of Balcones. Along the fault lies the many springs, San Marcos Springs, which form Spring Lake and are the source of the San Marcos River, a remarkable feature of which is the quality of water. In the eastern part of the city there are black-and-dark plains suitable for agriculture, the western part consists of wooded and herbal hills, often sown with cactus.

The San Marcos River runs through the city and Blancoand a lot of streams. Each of the reservoirs has parks and recreation areas.

On average, the warmest month in San Marcos is August and the coldest month is January. Maximum rainfall occurs in June. The maximum temperature recorded was 44°C in 1917 and the minimum temperature was 19°C in 1949.

Besides the University of Texas and the Baptist Academy, San Marcos is serviced by the independent consolidated school district of San Marcos. A few miles east of the city is the largest Gary Job Corps training center.

Texas Center for Forensic Anthropology is one of the four remaining anthropological data centers in the US and the largest of its kind in the world.

The city has a municipal airport.

The river is a popular relaxation area where city residents and tourists can practice water tubing, canoeing, swimming and fishing. Every year, on the first Saturday of June, the Texas Water Safari starts in the city. Partly because of its natural beauty, the city has received the nickname San Marvelous. The city authorities use this nickname in their campaign Contain the city (Keep San Marcos Beautiful).

Crossing of Lyndon Johnson and Martin Luther King's roads is considered the only one in the United States that crosses streets named after people they met. After several years of planning, a statue depicting the Johnson-King meeting in the Oval Office was produced in 2013. On January 20, 2014 the monument was opened.

The city center was established in 1851. In 1908, the Hace District Court was built in the center. In the downtown area around the court there are many restaurants, bars, concert venues and boutiques. The place is a popular tourist center of entertainment. The Texas Music Theater, located in front of the courthouse, hosted award ceremonies from 2011 to 2013..

Since 1987, the San Marcos Commission of Executive Arts and the San Marcos Parks and Recreation Department have held a series of outdoor concerts in the summer every Thursday night from June to August. The University of Texas holds the annual Hill Country Jazz Festival and Eddie Durham's birthday party. Local radio station KTSW also holds a music festival.

In San Marcos were shot scenes of a number of films, including Piranha, Simulant, Courage in battle, Cool guy, Faculty, Idiocracy, Escape, War in the House, Race with the Devil, E.C. The Tree of Life, The Night Friday Lights, The View.

In July 2006, The View named the outlet of San Marcos the third in the ranking of the best shopping places. More than 6 million people visit the shopping center annually.